From the hearing on the Traffic Plan on the major Danish Railway system, call from Council for Sustainable Transport, Friends of the earth (traffic) and the Danish Cyclist’s Federation.

The international connections are basically not discussed in the proposed plan.

However, this is mentioned about the traffic via Fehmarn:

“Traffic over the Fehmarnbelt will meet a stand-still during a period of construction. Driving over the Storebælt connection is not finally settled.

The traffic to Germany from Jutland is expected to continue with the current driving pattern, possibly a slight increase in traffic between Padborg and Flensburg until the connection across Fehmarnbelt opens. “

“Trains between Copenhagen and Hamburg will from 2022 go through Odense and Padborg. The restructuring is a consequence of the infrastructure work in connection with Fehmarn and adjacent works on land. During this transition period, trains are integrated into the traffic in the most practical way. “

During the transition period 2022 – 2032 it should be stated that both the number of seats and the driving times must be kept at least in relation to today. See later.

Furthermore, about the plans from 2032:

“Copenhagen-Hamburg via the Fehmarn connection is served around once an hour.

During some hours with regional trains and other hours with a long distance train. It is expected that some of the traffic by then can run as free traffic on commercial terms.

Connections to Germany to/from Aarhus can be improved, for example if every second trains from Southern Jutland (the Padborg train) is driving to Aarhus and ensuring connections in Kolding, for travelers to Odense and Copenhagen. “

Thus, a direct train from Copenhagen to Padborg is no longer planned, but a change in Kolding. In return, however, there is planned for a direct train between Padborg and Aarhus.

However, it will still be sensible with direct trains between Copenhagen and Flensburg.

The traffic for the new Fehmarn connection (tunnel) should be included as part of the traffic plan as a part of domestic traffic, as it does today. So – as a principle – a train every other hour between Copenhagen and Hamburg.

In addition, there may be additional trains run by “free traffic”, but this traffic should run integrated with the domestic time table and basically with same ticket system.

There is nothing in the proposed plan about the material to be used for this traffic. Here it should be added, that DSBs option on electric locomotives for driving in both Denmark and Germany as well as acquiring the corresponding cars should be implemented.

The current use of IC3 trains can hardly continue for many years yet, and the train sets are badly needed to upgrade the trains in domestic traffic until new electric trainset (EMUs) gradually takes over.

In any case, equipment that can be used in traffic to and from Germany in the future, both via Fehmarn and via the land border in Padborg shall be acquired.

Driving across the border

This traffic is almost not described. With DSB’s future purchase of new EMUs that can only be operated in Denmark, trains in Padborg must be changed if there is not procured other equipment. The current runs with the limited number of IC3 trains with German security equipment are certainly not future-proof.

In the Government’s 2017 initiative on the future organization of rail traffic in Denmark (the one with the many proposals for tender) is the problem, however, more fully discussed.

Here you will find ideas to outsource the local journey to/from Germana right up to Tinglev. But there mentioned German trains all the way to Fredericia. This is not apparent from the Traffic Plan.

A sensible traffic service must include direct international trains Aalborg / Aarhus to/from Hamburg every other hour as on Zealand. Possibly every other hour in between to Flensburg with correspondence to Hamburg.

The connection may be possible splitting a long distance train from Aalborg / Aarhus in Fredericia.

In addition, direct regional trains between Flensburg and Randers during the daytime.

At the same time, to Fehmarn connection is ready, the trains Copenhagen – Hamburg over Padborg should once a day be combined with a set of night train as described below. 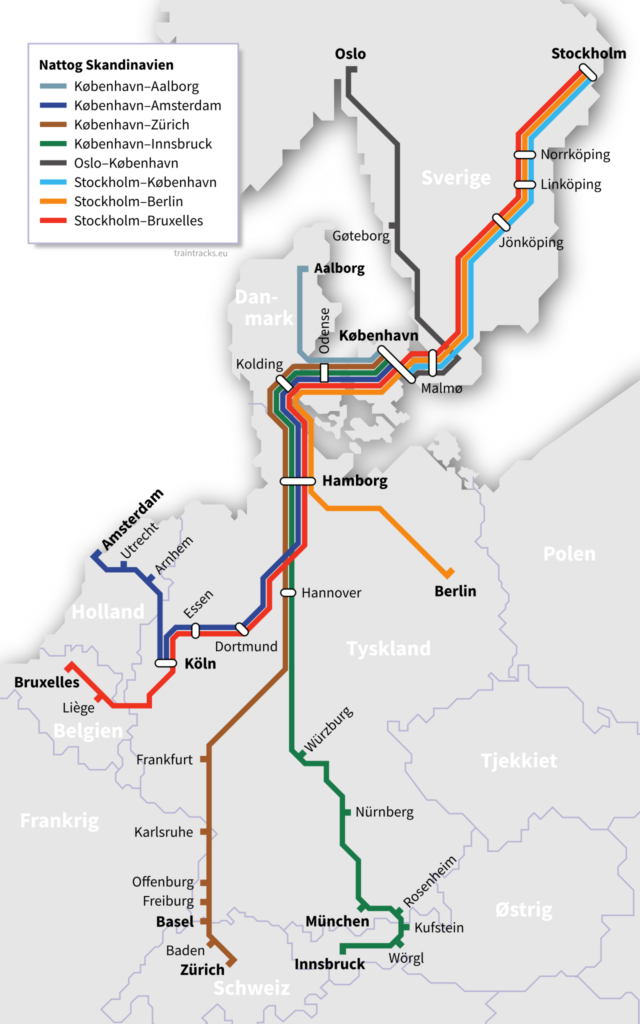 Driving across the Øresund

Night trains to Germany and further away must be reintroduced. The day trains between Copenhagen and Hamburg – until the Fehmarn connection is completed – can be combined on an evening run with a section of night train, where an international night operator brings forward night carriages from Hamburg, and further to for example Amsterdam and Basel. Similarly, night carriages are driven the opposite way with a morning departure from Hamburg. We refer to our suggestion as to what can see here (in Danish).

To realize this, the option for additional electrical locomotives must be utilized, the ones equipped with German safety system, and IC-quality cars should be purchased or rented.