How can environmental and climate defenders allow themselves to claim and ask for loss-making activities with DSB’s, which are already affected by problems and reductions? Environmental organizations such as the Ecological Council have refused to support proposals for better international trains (concrete night trains) on these grounds. At a time when air resistance and support for international trains are extra important, this issue must be taken seriously.

International rail traffic differs on some points from regional traffic and commuter traffic. A long historical tradition gives that international traffic is not subject to strict requirements to drive otherwise than

International rail traffic is thus closer to commercial or “free” traffic than regional traffic, where politicians set strict rules for when the first and last trains are to run, the frequency, etc.

For regional (we call it domestic – it is a small country) traffic, it is not surprising that Danish fast trains IC LYN are the most profitable. What might surprise is that the international trains (numbers from that time there was also a night train) was twice as profitable per train km as IC LYN.

However, it does not surprise the users of EC trains and night train that there is reasonable economy in these trains. At least they are generally well occupied. It is rare to see occupancy rates in public, but they actually exist for the last year of the CityNightLine operation: 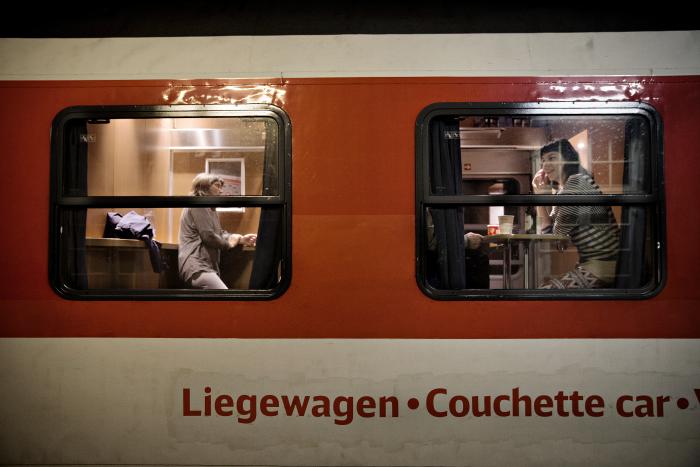 Good or bad economy for night trains
When night and international trains are generally regarded as an expense despite a fairly good occupancy rate, it is not least because society indirectly shoves a lot of money into air traffic, which can thus sell tickets at prices that in no way reflect the climate-detrimental effects of the aircraft (no fuel taxes, very low infrastructure charges and no VAT compared to the countries in which they operate). With the current lack of climate regulation, airplanes are a hard-hitting competitor for climate-friendly night trains in Europe.

The previous night train to Copenhagen also had other problems than the competition from the planes. The CityNightLine (which was terminated in November 2014) did not run full through Denmark, due to the fact that each seat only had to be sold once on the entire route. As passengers entered south of the border, these seats were empty through Denmark. It contributed to a poorer economy from a Danish perspective.

The night train at that time was not part of a standard concept for DSB. I.e. that locomotives and stand-by were maintained solely for the sake of one train in each direction each day. It made a costly relationship.

The material was quite old and worn out. Operator DB continuously lowered the maintenance level of the train.

The night train was then miserably marketed. In the last many years of the operation you saw it very rarely advertised. The train was a well-kept secret.

All of these conditions can be changed
Assume that DSB will ensure the future international rail connection between Copenhagen and Hamburg – all the while the Fehmern line is closed from 2021 to 2028 (or later?) due to construction work Puttgarden – Lübeck. By introducing new electric locomotives all the way to Hamburg with new cars (of IC-quality) DSB can build a modern and economically sound concept for EC train service to / from Hamburg. The horrible alternative is to drive with the old fleet of diesel IC3 train sets under the power lines on the same route, all while this operation with IC3 sets becomes the last line in which they are used. Already today there are frequent problems with “foreign” IC3 train on German grounds.

Driving from 2021 with modern electric trains between Copenhagen and Hamburg, it will be quite easy for DSB to enter into cooperation with the Austrian operator ÖBB to carry a night train from southern abroad to Copenhagen once a day in the same 2-hour frequency which is likely to be initiated with the EC trains. Domestic passengers can also be included in international cars because bureaucratic rules have in the meantime been changed.

ÖBB is renovating their night trains and buying new ones. ÖBB has an internal share of 18% of overnight travel, which makes ÖBB a successful niche operator for night trains in Europe.

ÖBB would like to talk to DSB about such cooperation, and if the negotiations are going well, it may lead to a 2021 being the year in which a new night train to Copenhagen can be introduced.

In this way, locomotives and seated cars will not be of an alien type than those which is already in place, while sleeping and couchette cars will be owned by ÖBB, who will take them from Hamburg.

Good economy must be foreseen
With good marketing, there is thus every reason to believe that a future night-train will not incur DSB with a larger deficit than a similar domestic connection that connects Copenhagen and Southern Jutland. At the same time, it should be noted that in the EU there is increasing interest to improve the conditions for the cross-border trains. It will automatically generate greater interest in rail traffic between Denmark and abroad.